I sit down on a Flag post easing myself after speaking with friends on cellphone. I’m wearing an American Jacket and listening to Nagathihalli’s ‘America America’ song, and then wait for a friend to reach my spot. Around a hour ago, i learn that Chandan Shetty is about to release his latest “Shokilala” song.

Watching around, i feel a lot of fun, sensing abnormalities of the world like a writer does. In the time, i spend around half an hour lonely, but immersed in peculiar thoughts. A small kid comes near the place i sit. He stands below and gives a smile, and i take my mobile to capture it. 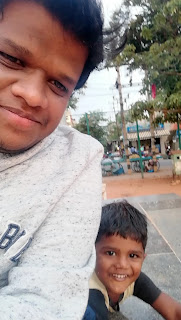 In very next few seconds he crawls into my sides touching my back, and making a round from the back. I sense the innocence of this kid. He is hardly 3 years, and i start asking him questions which I’m only good at. He reveals that his name is Raju, and i see the scratches on his nose. I had sensed that he is some laborer’s kid.

I put my hands into the pocket, and i pull out the only coin that’s left. I then show it to him, and say: “Go buy chocolates with this!”. He replies: “No, i don’t want.” This was the time i think about him, and he suddenly puts his hand into his pocket and brings open more number of coins, and shows that he has more than what i can offer.

I start laughing at myself, learning from the kid’s intelligence. Here i understand from him that the Kid doesn’t want more than what he needs. And he has enough. In a time, his mom reach him and i understand that he comes from Tamil Nadu. I make a move from there towards my home without any other important thoughts. I clear my money on the way.

I switch to Youtube and start watching the “Shokilala” song, pondering while i write this. This kid was such a simple boy, in his attire and in his gesture. He seems to eat simple, and spend simple. And, he has the unknown limits that he has unknowingly put on himself. While the other side, i reach my home only having two mobiles in the pocket, spending everything else for my luxury. Even at this stage, many of my likes want more, while comparing myself with that kid has a lot for me learn from.

The quote from Mohandas Karamchand Gandhi seems to be so apt to this 21st Century Lifestyle: